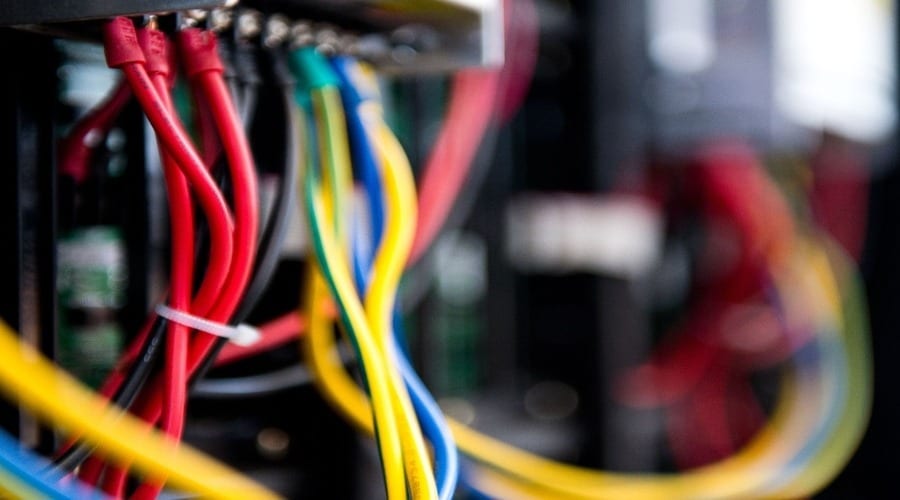 Regardless of what project you’re working on, knowing what electrical wire colors mean is absolutely critical. Understanding this can help you troubleshoot problems, keep your home safe, and keep you safe when working on them. But remember that every wire could carry current so always test them beforehand and proceed with caution.

If you have any doubts, contact a professional electrician and have them do the work for you.

Green, green with yellow stripes, and bare wires are all considered to be ground wires. Ground wires protect an electric system from power surges during events like lightning strikes that would cause voltage spikes on any other line in the system. This is critical for preventing electrical fires and other complications caused by electrical overload.

While they do not carry electricity, if there is ever a problem due to excessive voltage coming into your home’s electrical system, grounding wires get rid of the excess electricity before it has the time to reach anything else. Otherwise, a power surge could overload and break your important electronics, from appliances to home computers.

Although they are not considered “hot” wires that actively carry currents, green wires should still be handled with caution. Remember that you shouldn’t ever use the green wire for anything other than grounding. If you do, you could be inadvertently increasing your chances of electrocution.

Many older homes have systems that don’t include grounding wires. This should be addressed by a professional right away in order to ensure that your home remains safe in the event of a power surge.

You can find blue and yellow wires most often in commercial buildings. They are commonly used as live wires pulled through a conduit, meaning that they are the wires carrying electric currents. Wires that carry electricity to outlets or switches might be blue or yellow depending on their use.

The color code for each wire dictates where it can go within a building’s electrical system: Blue wiring is usually reserved for travelers switching between three-or-four way circuits. In contrast, light switch legs (which control lights) will typically be yellow.

If a wire is black, it is a hot wire. That means it will conduct the live current straight from the electrical box to its final destination. Black wires pass electricity to the outlets and appliances in your home’s principal power supply. They can also be used as switch legs. These connect the wall switches with plugs or lights, which then get energized after you turn on the switch.

Remember that it’s essential for safety reasons that you shut off any circuit breakers supplying black circuits before working on them. If not, you could put yourself in a hazardous situation. It is important to treat all wires as hot wires, but particularly black wires.

White or gray wires are neutral wires. A neutral wire returns electricity from the hot line back to your home’s electrical panel and completes the circuit. You can also use a white or gray wire as an alternate power source for outlets not served by another cable, but it is important to clearly mark both ends with colored tape.

Even though they are considered neutral, white and gray wires might be carrying currents and pose a real danger if you don’t handle them properly – one wrong move could result in electrocution. Since these wires are carrying power back to the service panel, they should be handled with caution.

Red and orange electrical wires are often used as secondary live wires when installing large appliances like stoves, dryers, or air conditioning units. This is because they can produce 240 volts for these larger appliances that require more power than smaller devices that only need one (black) supply wire to work.

While you mostly use red or orange wires with larger appliances, you can utilize them on small voltage applications such as lighting systems.

Reach Out To The Professionals At U.S. Electric

Electrical projects can be incredibly complicated. If you have a project that includes wiring, it is essential to know which wire corresponds with which purpose so you can keep yourself and your family safe while working on projects around your home or office.

If you need help with any electrical project, don’t worry. We are just one call away. Our team of professional electricians can assist you with any project you have, from essential electrical upgrades all the way to large-scale commercial projects. Call us today for solutions to all of your electrical needs.